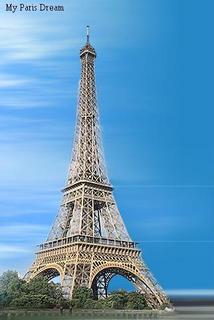 Sounds classy ey? All of a sudden the French bug has bitten me, and lately, I am trying so hard to learn the language, as if I had not enough of basic French in college. Funny thing is I'm still figuring out the reason for all this effort.

Being the impulsive buyer that I am, I recently bought this little French book. I know, there are heaps of must-read bestsellers but still, silly me. Well, I guess it's just another proof that strange things really get into one's head sometimes...double meaning? *wink, wink* Much to my surprise, however, Like Dan Brown's, Stephen King's and Anne Rice's, the book really got me hooked. It's the first and last thing that I read each day. How's that for addiction?

Then of course, the million dollar question still lingers...after the tongue-wrestling and lip-twisting attempt to speaking French, porquoi faire? Well, like I said, im still figuring it out. Maybe I still have that Paris dream in my head.

Excellent Blog! From what I gathered, you could make a ton of money from this blog! Click here if you're smart.