To Resist or Not To Resist

The Philippine Navy seems to be confused whether they want to support Ka Roger or Gloria Arroyo. Either way, this is one helluva episode where they say history unfolds. Not in a good way, though, not in a good way. Something tells me, martial law is just around the bend. 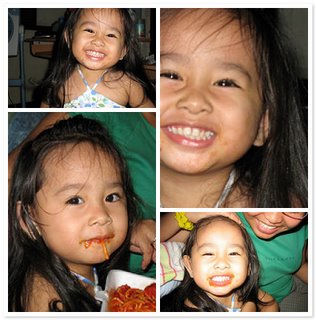 Went to Eva’s place to fetch her pasalubong for me. I got a charming watch from her trip to SG and Leo got danggit and dried pusit fresh from her trip to Iloilo, and Eva keeps on taking snapshots of Gabby. Thank, kurims!

Only in the Philippines

Early in the morning there are speculations that Gloria Arroyo plans to put the country under a state of emergency because of the brewing unrest influenced by the opposition forces and disguised by the celebration of the 20th anniversary of the people power revolution. Then there’s a buzz that some critical personalities in the armed forces will join the mass rallies which will then signal the start of coup d’etat. Then the President went on air to announce that the country is under the state of emergency. It was like Marcos immortalized. I thought it was the beginning of the end of democracy. Just as we thought the economy recovering from the previous blows, here we are once again making awful things that only drag the peso back to the nether regions of the market. We are like a nation of masochists. Sometimes I feel like we never really wanted peace and quiet in this country at all. It’s like we live to fight one another.

It is sweet to celebrate the people power revolution that redeemed us all from the corrupt martial law of Marcos, but I do not think that we need another people power revolution in this day and age. It just doesn’t feel right anymore because like the taxes we pay, its meaning has long been corrupted. People’s movement has been used and abused by entities that need power just as badly as they want to take power away from the current administration. And of course, there’s no denying that Arroyo overreacted because she desperately held on to power and clung to it with all her might, sending the message that she won’t step down from her throne. She knew she had it coming, hence, the pseudo-martial law came in handy to save her palace.

How ugly can our political scene get? I think we’ll find out sooner than later. This country is becoming a mess and we can start blaming one another now.

The justice system in this country is so sluggish and long drawn out. Hearing is reset to May 18. Nice. Three more months from there and the case will celebrate its second annoying anniversary.

It’s R’s nth birthday. He treated us out for burger and fries at Hotshots. As usual the boys were rowdy and male jokes abound. It will definitely be just nice if the next tech writer’s a girl so I can have somebody to go kikay with :D…but from the looks of it, the next tech writer’s another he. I guess I’ll just have to enjoy being the princess :p.

The horror of the Leyte mudslide is sinking in. Visit CNN and you can’t help but be emotional. I hope and pray that there are still survivors underneath the mud. Sometimes Mother Nature can be cruel. But what we did to her to earn her wrath doesn’t matter anymore, at least in this time of crisis. There are still about a thousand people missing and the people of Guinsaugon need our help in any form. The US, China, Thailand, Taiwan, Malaysia, Spain, Singapore, New Zealand, and South Korea have already expressed their support, so have Filipinos across the globe. We, too, can do our part in sending our love and support to the victims of this tragedy by giving blankets, food, tents, clothes, medicines or cash to the local government of Leyte, or sending them to various foundations accepting relief for the victims. Please help.

Thoughts about telling the truth:

- People lie to save their butts, to make themselves look better to other people, and to put other people down
- People believe other people’s lies because it is more convenient to listen to lies than go out and look for the truth, the lies were expertly woven that they cover up the truth nicely, or they just don’t care what the truth is.
- If a person has gravely lied to somebody once, expect that s/he will lie a second time. An exception is that when lying is second nature to that person that it becomes part of his/her everyday life.
- If a person lies to his/her friend, then that person is nobody’s friend and he/she isn’t a friend to him/herself.
- Honesty is the best policy.
- People have different versions of the truth. They can pick the most convenient for them so that people easily believe in it.
- Bending the truth is never a healthy hobby.
- What comes around goes around, Karma is absolute.

Thoughts about being absurdly oversensitive:

- If you play untactful jokes on other people all the time, chances are you will fret about people’s smallest comment even if it indirectly involves you.
- Think with your brains not with your heart…or mouth.
- Do not put yourself in a situation that says “you’re not part of this”
- If you don’t know anything, it is safer to ask than assume.

- Birds of the same feather flock together.
- If you can’t beat them, it’s a bad idea to join them.
- If you don’t treat somebody as your friend, then don’t use them just so you’ll have company.
- Friends never do shameful things to each other.
- Friendship is never an exclusive thing; it should be shared to everybody who wants to celebrate it.

While the whole world was having a date, I was having a romantic relationship with deadlines. By 8pm, Leo fetched me and handed me a single long-stemmed, red rose. I must say it did the trick. It’s just more romantic than the huge bouquets that are so embarrassing to carry. Plus he went shopping with me for some flats. I didn’t want chocolates this time, so after having bluntly asked for his Valentine gift budget the night before, we went to megamall to look for colorful flats and picked up two pairs – a green suede ensemble and a blue and yellow beaded pair. Nice ü.

It’s been quite empty here for sometime. I blame office work. It’s crazy in my four corners. One time I am slacking for weeks on end and another time I’m drowning in responsibilities and deadlines. The erratic schedule is making me a little under the weather. For several weeks now, I’ve been having fever on and off. I chill at night and be all okay in the morning. Then the vicious cycle repeats. Ergo, the stale pages of my space. Here goes a shot at making my self-discussion more regular.