(no good pictures here, just a few that I've taken on my phone cam, the darn camera decided to die and my bro can't find a way to recover the pics :( so sad) 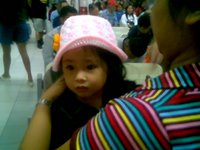 It's a gamble going to Boracay at the height of the Habagat season. But since the plane tickets have been paid for months ago (on sale), we simply had to take the trip like its still summer :p. Typhoon Florita had left, but it did a good job delaying our flight for two hours. Ergo, we had to move double-time getting out of Roxas City airport, spotting our pre-rented van service (only P2000, thanks to Leo's connections), and picking up Kat and her kids. The supposed four-hour travel time from Roxas City to Caticlan shrunk to three hours at a rollercoaster crazy speed. Despite that, we arrived at Caticlan a little before 7:00 PM, then side tripped to Tabon for a short banca ride that ferried us to a bigger banca in the middle of the sea. The Caticlan jetty port is out of service as water there becomes too shallow for the banca to dock this time of the year. 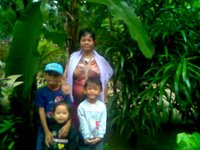 Probably one of the biggest perks of visiting Bora during the Habagat is that prices of most everything is at their super low. At P100 each, two tricycles brought us to La Isla Bonita in Boat Station 3 (note to self: I saw Mandala Spa along the way! Should have left a message to Donish for that let's-see-what-i-can-do winking blog response, hehehe). Our lovely Bora home is only P2500/night! It's a well-furnished two-storey air-conditioned apartment, with ref, cable tv, kitchen, dining area, sofa, a hammock in the upper veranda, and five double beds! A mini island-hopping tour costs only P1300, with an added service of having our talipapa-fresh seafood cooked by the boatman.

At 11am the following morning, we made our way off the beaten track. On the back side of Bora, the water was surprisingly calm, Bora clear, and busy with tourists. There were banana boats everywhere and a couple of jet skis and parasails, too, which were all missing at the white beach. After a hearty lunch at the boatman’s island home, we went to the Crystal Cove where further improvements are in the works. Leo and I accompanied the first time Bora tourists as they enjoy the caves. Unfortunately, we had to cut their fun short for fear of finding an empty coral bed come snorkeling time. True enough, except for the occasional schools of fish that pass by every time the kids throw our packed snack in the water, there was scarcely fish in the area. Sad.

We were later dropped at Tambisaan where the sand is as immaculate white minus the waves. It could have been perfect if not for the constant arrival of boats everywhere. Still, the kids were ecstatic. We went back to our cottage for a quick snack, and not a moment later, the kids began marching to the beach lead by my 6-year old nephew, Ton-ton. Ang kukulet! Hehehe. I guess it's one of the downside of having a beachfront cottage.

By tradition, Leo and I "pilgrimage" every time we visit Bora. This means walking all four kilometers of white sand to Willy's Rock, and back. It was already past 12 midnight when we reached Willy’s Rock, complete with the familiar leg aches. And since there isn't much happening on the beach, we just had to break the tradition for the first time, and ride a tricyle going back. Hehehe. 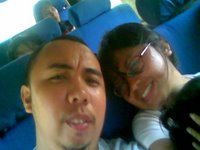 Before we leave Bora the following morning, Leo and I succeeded at luring my mom to visit Willy's Rock. As expected, both the kids and the not-so-kids dived in the water at the sight of the pristine beach. Ergo, we reached Caticlan a couple of hours late than what our van service driver instructed. This resulted in us eating lunch inside a moving speed-maniac van. It was a happy mess, hahaha. 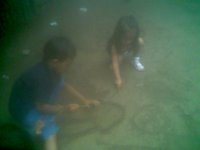 We reached Mom's hometown four hours later. Casanayan is a fishing village and Mom's house is a stone's throw away from the sea. The kids schemed and had their Tito Dodong take them to the sea hoping for a swim. Too bad the tide is high and the water isn't safe for swimming because of jellyfish sightings. Come dinner time, Manong Neil, a good family friend, invited us to his place. It's impolite to turn down a good offer so we shared their dinner of sinigang na bangus, chorizo, daing, and fried fish.

Capiz night sky is always heavy with stars, always enchanting. However, sleeping the rural way isn't as pretty. It takes time to appreciate the simplicity of bamboo walls and the raised bamboo flooring of the bedroom. Plus in the witching hour, you're mind is better off thinking ways to avoid mosquito bite than getting bitten by the creatures of the night that Capiz is quite well known for. Needless to say, i didn't have a good sleep. We woke up to a drizzling morning, naturally missing the passenger van that rounds up our street. After breakfast, we rented a tricycle that brought us to Lutod-Lutod in Pres. Roxas where our friend, Che-che, prepared a sumptuous seafood feast for us fresh from their fish farm. Everybody pigged out on king crabs, yum!


After that perfect lunch, it was deja vu at the airport as our flight was again delayed for another hour. In a sense, it was good because it bought us time for pasalubong shopping. Oh, and despite the bumpy plane ride, it was fun especially since Mom won in the Bring Me contest, at long last! Hehehe.

I still need to see the other parts of Bora. I'm pretty sure enjoy kayong family sa trip nyo ;oP

Awww...Thanks so much, sis!!!! It's been a long time since you dropped by :D miss you na, mwahness!