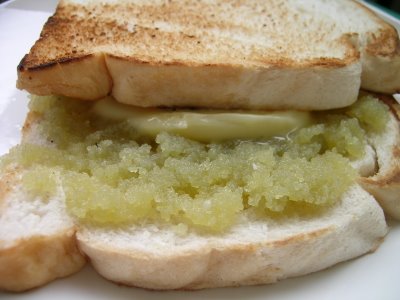 I suddenly mustered the courage to prepare the food that I've been salivating to eat. While in SG, I was facinated by two foodies - laksa and kaya. A couple of days ago, I read from one excellent food blog that Bread Talk in Malaysia serves kaya bun, and then just the other day I read from an equally great blog that kaya toast is being served in Kopi Roti in Mall of Asia. My salivary glands began to work overtime. I could have easily gone to MOA but the adventurist in me affirmed that I can make a good bottle of kaya (wishful thinking). So on an overcast Saturday afternoon, I tugged the bf to the nearby Rustan's supermarket to buy the ingredients - eggs, sugar, salt, and coconut milk. 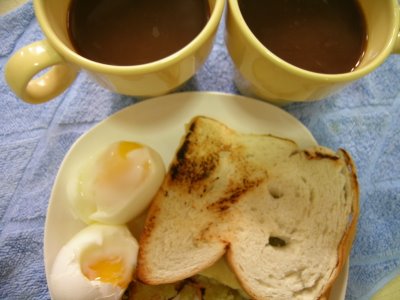 Armed with an anonymous recipe from the internet, and another one from Chubby Hubby, I started to follow the procedures by heart, which to my surprise, were so darn easy...or so i thought. The end product of this brave attempt? Yummy, actually, (even my officemates think so, too!) and the taste is reminiscent of the kaya toast we had at the airport, only the texture isn't as good. My kaya never made it to the jam state, instead, it turned into some sort of flan-ish mixture minus the wobbly form. It was like a soft, fluffy, greenish, scrambled egg in texture. What's puzzling to me, though, is the greenish color of the kaya without even a drop of pandan essence, hmmm...At least it tasted like kaya, hehehe...and what better way to serve it than to slap it on a toast with lots of butter, served with soft boiled eggs, and a home made cowboy kopi roti (generous tablespoons of condensed milk + black coffee) to wash down all the carbs, ahhh, life.

I know! Obviously, these are the reasons why I ballooned! Hehehe...Baka gawin ko na ngang food blog eto eh, hehehe.

Hehehe, I promise to send a bottle to you when I get to perfect the recipe :) promise yan ;)